A Tale of Two Vendemmias

A few Saturdays ago, Paolo and several of his friends did our vendemmia, or grape harvest. Everyone in our region of Italy harvests their grapes within a few weeks of one another, usually in the last half of September. You know it’s vendemmia time when you can’t drive anywhere without getting stuck behind a tractor pulling a loaded grape wagon. My sister, who visited recently, even built up the nerve while driving to pass one tractor while playing chicken with another. She won.

Before I met Paolo and participated in my first vendemmia in 2008, I had heard about the vendemmia from the mouths of expats and tourists in Italy, and maybe I’d read about it on some travel websites. The vendemmia is heralded as one of those bucket-list events, like seeing the Northern Lights or the Green Flash during a Florida sunset (which, by the way, in nearly 40 years of living in Florida I NEVER saw, not once). If you love Italy, you simply must—must—participate in a vendemmia. To fail to do so would be akin to living in Manhattan and not taking the subway. You’re just not a real New Yorker, or a real Italophile, as the case may be.
Ah, the vendemmia of lore. Connect with Mother Nature. Break a sweat and strain some little-used muscles all in the name of that ancient, noble pursuit of winemaking, knowing that the fruits of your labor will quite literally be transformed into a magnificent vintage. Your midmorning break, after the dew has evaporated from the vines and the sun has started to warm the ground, is a bountiful breakfast of salami, prosciutto, pecorino cheese (bought from a local cheesemaker, of course), fresh-baked bread and wine, of course (who cares if it’s only 10 a.m.—you’ve earned it!), all spread before you on a red and white checkered tablecloth. Maybe one of the colorful locals will sing a song or two, or regale you with tales of his childhood in the campagna.


After breakfast, it’s back to work. But who really minds? You know you’ve got a similarly delightful and even more bountiful lunch waiting. Tables, now set up between the rows of vines, are spread with those same checkered tablecloths, more wine appears (naturally), and the casalinge (housewives) start to bring platter after platter, bowl after bowl of just-cooked Italian country recipes to the table.
The meal easily lasts for two hours.  Maybe there’s a little more picking to do after lunch. Maybe the farmer just waves you on, saying you’ve done enough work and more than earned your feast. You drive home or back to your hotel, stuffed with food and priceless memories of your little taste of authentic Italian life.


At least, that’s how I thought it would be.
Except that my first vendemmia didn’t quite live up to the fantasy. We were a ragtag bunch of family, half of us sick with colds and the other half getting sick. We used Paolo’s brother-in-law’s tractor to haul plastic garbage cans full of grapes. He had to keep the tractor running even while it idled or otherwise the battery would die, so tractor exhaust wafted through the vines. Our breakfast consisted of a bottle or water and a bottle of orange soda, both of which I insisted Paolo go to the store and buy. I should have had him bring back Sudafed and cough syrup. 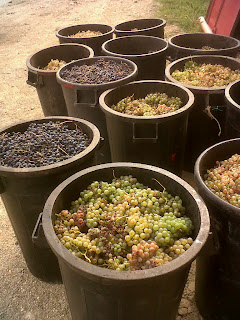 We weren’t shortchanged on lunch, however, as Paolo’s mother, Franca, who has more casalinga in her pinky finger than most casalinge have in their entire bodies, prepared a wonderful spread of food.


I loved that first vendemmia, despite the tractor exhaust and Spartan provisions and absence of checkered tablecloth. And I’ve loved everyone I’ve done since (though, admittedly, I sat out last year because I was prego).

This year, I was…ahem… not asked to participate in the vendemmia. As with last year, Paolo recruited a bunch of guy friends to help. (My dear husband has a very boyish streak, especially when he’s around other boys. Had he grown up in 1950s America, he’d have had a tree house with a sign posted, “No girlz allowed.”) So, I asked if I could at least go to the store to get them breakfast provisions, as I’d done last year. “Massimo has it all taken care of,” I was told. Humph.

Never one to miss out on the fun, I did drive down to check on da boyz around mid-morning, and I arrived just in time for breakfast. Their version of breakfast was as follows: Two large focaccia (“from the best bakery in Florence!” Paolo later boasted), two salami logs, and five bottles of wine for the nine of them. These items were eaten not from plastic plates on a checkered tablecloth but from the flatbed of Paolo’s pick-up truck. They finished well before noon, and brought the grapes down to our cantina to start processing them, a job that, with this year’s meager harvest, required far fewer than nine people. When Paolo called for me to  throw down some plastic cups, I knew there was a lot more drinking of last year’s wine than there was processing of this year’s. 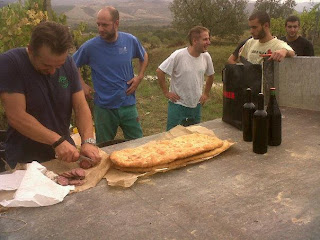 Yeah, that's just how we roll. 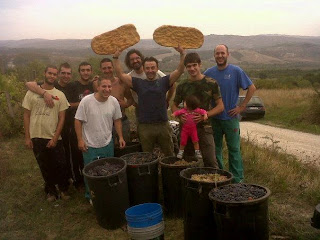 Da Boyz and their bread, with Naomi stomping grapes
Franca came through again, of course, and put out a spread—in her garage, not amidst the vines—of pappardelli con cinghiale (long, thick homemade pasta with wild boar sauce), roast chicken, roast pork, sausages, ventresca (thick bacon), roast peppers, eggplant, salad, and for dessert, mimosa, which is a cream- and chocolate-filled cake. And wine. 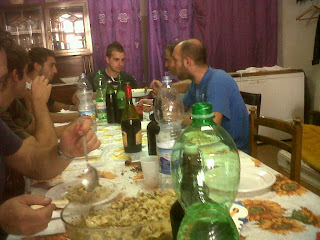 Franca's feast - with nary a checkered tablecoth in sight
The festa ended with one of the guys throwing up in the bushes, then having a semi-articulate conversation in English with my visiting parents, and promising to write to them. “I love Obama!” he implored repeatedly. Paolo told me he “had to go take care of something” with Massimo and Peppe and would be home in a half hour.
Ninety minutes passed, and Paolo finally arrived at home, his left thumb bloody and bandaged. The thing he “had to go take care of” was a little drunken archery practice. Massimo had brought a crossbow with him (Why? Why?), and when Paolo tried it out, he failed to move his thumb far enough out of the arrow’s path. The injury was bad enough, but it could have been much worse. “Jesus Christ!” I said. “Did you wash it, or sterilize it?” No worries he said. Massimo cleaned it—with wine—and dressed it with plumber’s tape.
Sigh…boys will be boys…and it’s a good thing vendemmia comes but once a year… 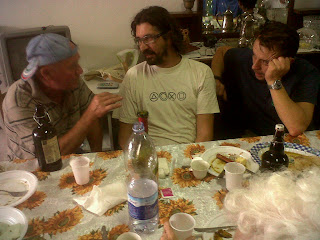 ***
Just so no one’s illusions of the vendemmia of legend are completely shattered, I am somewhat dismayed to report that on the same day as our salami-on-the-back-of-the-truck vendemmia, my fellow Alleronesi Nick and Simona hosted their vendemmia. And, as her website so smugly confirms, it was the Italian Dream Vendemmia, complete with gourmet menu and seated, outside lunch (still no checkered tablecloths—ha!) in the splendor of the Umbrian countryside.


Frankly, I’m a little threatened by the two of them, as Allerona doesn’t really have room for two cool international couples. Simona is a beautiful Italian chef. Nick is a handsome British photojournalist. (He’s got that damned English accent. How can I compete with that? Hmm, I do have a cute baby to shove at people, and all they have is a goat and a few chickens.) 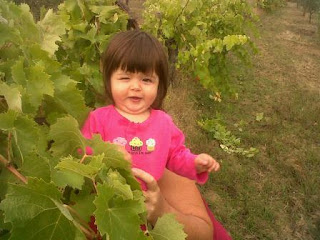 They had 30 people helping them and when there were no more grapes to pick, the crew stacked all their firewood. What’s worse is that when I saw Nick’s photos of the day, all my American expat friends were there, picking grapes, stacking firewood and feasting on Simona’s lunch! Oh the disloyalty! The betrayal! One of them even had the audacity to blog about it! 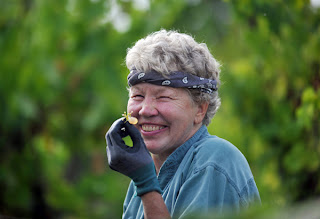 My so-called friend Susanna, AKA Benedict Arnold,
picking grapes and looking cute at the other vendemmia.
Photo by Nick Cornishhttp://nickcornishphotography.com/

Still, I know Paolo and the guys would not have traded their salami sliced with a pocketknife for Simona’s “savory cake with radicchio, gorgonzola and walnuts,” not even for a minute. (I might have; them, never.) And in the end, I think it’s a good thing that there is always a tale of two vendemmias. Like two sides of the same coin, both are a slice of authentic Italy, albeit one perhaps a bit more “rustic” than the other. 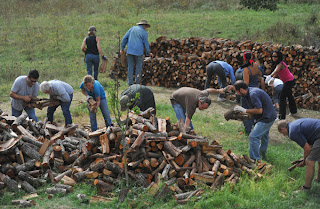 But I have to admit, when I read that Nick and Simona got all their firewood stacked, well, that hurt a little. 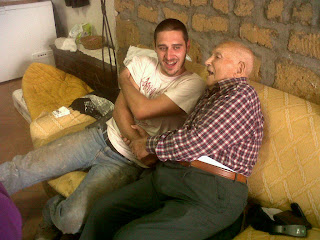 Our secret weapon that makes our vendemmia kick all other
vendemmias' asses: Nonno Gino singing
Posted by Unknown at 5:05 PM