A sad goodbye to a woman I never met

Yesterday, Paolo and I attended the funeral of a 32-year-old woman who died after a long struggle with ovarian cancer.

I didn’t know the woman, but Paolo is friends with her husband; he works where Paolo buys a lot of his construction supplies. We knew his wife had been sick for some time, and when Paolo’s friend was no longer at work – he was staying in Rome to be near his wife, who was installed at a cancer clinic there – we suspected the worst. Still, when news of her death came, it was a sad semi-shock.

At some point in the last couple of years, Paolo must have told his friend that we were trying to get pregnant. His friend confided that he and his wife could not have children; cancer had already taken care of that. So when I did finally become pregnant, I always felt like a bit of a heel whenever I’d walk into the warehouse where his friend worked – like I was somehow flaunting our good fortune and my growing belly in the face of their sad, terrible luck.

Paolo’s friend was always kind and enthusiastic about my pregnancy and afterwards, when we brought Naomi into the warehouse. He was no less kind when I saw him yesterday, as I gave him the customary kiss on both cheeks and muttered some words of condolence, all of my Italian suddenly escaping me. In fact, he seemed to be consoling me as my words fell flat and my eyes welled up.

The church was filled to capacity, so we waited outside with several hundred other people who’d come to pay their respects. Listening to the priest’s eulogy and then her brother’s tearful goodbye to his little sister, it was the first time I wished that I didn’t understand Italian as well as I do. I’ve attended other funerals here, but I’ve always been able to zone out as the words and repeated prayers drifted over my head, just unintelligible enough for me to not have to tune in.

But not this time. The priest delivered a touching tribute to this woman who was obviously well-loved in her community, and adored by her family and young husband. He spoke of her loved ones’ confusion and frustration that God did not answer their prayers, and save their daughter, sister, wife and friend. He spoke of how she would join her mother, who died when she was just a teenager. I don’t think he had a good answer for why God ignored their pleas – to this day, I’ve not heard a satisfactory explanation for why God allows so much pain and suffering in life.

When the mass was finished and the psalter had been passed around the coffin, the mourners began to file out, and make way for the casket and immediate family to exit. First came the elaborate flower arrangements, their cellophane wrappers all crackling in the wind – a sound I’ll forever associate with Italian funerals. Then came the casket, carried by four of her relatives. Right behind them was her husband, who seemed to have lost all the stoic calm he held together inside the church. He walked alone, red-eyed and weepy, and I wondered why he didn’t have a friend or family member at his side, to hold his arm or shoulder. But maybe he had to make that walk by himself.

We opted not to join the funeral procession as the mourners followed the slow-moving hearse on foot up the hill to the cemetery. I think seeing a young man give his wife’s coffin a final kiss goodbye before she was lowered into the ground would have been too much for both of us. Instead, we walked back to the car in silence.

Paolo and I have a lot of worries these days. Money is scarce, the Italian economy is tanking, my elderly parents are on the decline, and this brutally hot summer is further proof that global warming threatens to turn the green hills of Umbria into the sands of Morocco. Still, once we were headed back to Allerona, I said to Paolo, “Let’s not complain about anything anymore today.” He agreed.

We picked up Naomi from my mother-in-law’s, and her disposition was sunnier than ever. All yesterday evening, she played and clowned and laughed, and her giggle seemed sweeter than it ever had.

So today, I remain without any irreverent prose or funny stories about life in the Italian countryside. I’m tired, because I have a baby who still won’t sleep through at night. I’m sad every time I think about the poor young widower, walking behind the coffin carrying his wife, and along with her, all their hopes and dreams for a future together.

And mostly I’m grateful, and I don’t want to complain about anything today. 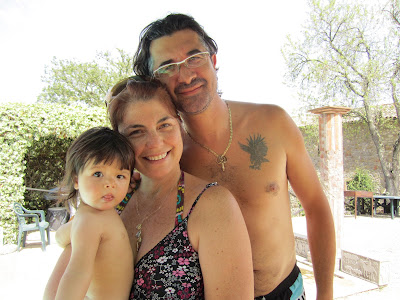