For some time now, I’d been wanting to visit Il Parco dei Mostri (The Park of the Monsters), a quirky tourist attraction adjacent to the town of Bomarzo, near Viterbo. Since Easter Monday is a festa (legal holiday) in Italy, Paolo promised that he would not work on the house, his new aquarium (don’t even get me started) or any other projects, and we would spend the day doing “whatever (I) wanted.” Bomarzo is only about 40 minutes from us via the autostrada exit at Attigliano, so I announced that was our plan.
Besides, I thought, on Easter Monday, it won’t be very crowded. Those of you who know Italians and their festa behavior better than I, please stifle your laughter.
﻿﻿﻿﻿ ﻿
The Park of the Monsters is a Renaissance sculpture garden, if the Renaissance had LSD, that is. Set amidst the so-called Sacro Bosco (Sacred Woods), the park is filled with fantastic stone carvings of well, as the name suggests, monsters, but also mythological figures, animals both real and imagined, formal courtyards and small-scale buildings. All of the stone carvings were done in situ, meaning they were cleaved from the boulders that were already there.
The garden was the vision of nobleman Pier Francesco Orsini, a member of the wealthy and venerable Orsini clan, whose long and sprawling pedigree in Italy includes three popes, 34 cardinals, and assorted generals, princes and thieves (none of these titles were mutually exclusive). Piety never kept a good man down, and numerous Orsinis were the bastard children of popes and cardinals.
﻿ ﻿
Whether he was conceived in the pope’s chambers or in a whore house (those Orsinis did get around), our Pier Francesco was apparently a romantic guy with a healthy sense of the bizarre. Though the historical record is not clear, the popular tale is that he commissioned the gardens after the death of his beloved wife, Giulia Farnese, who is not to be confused with the Giulia Farnese, who was mistress and baby-mama to Pope Alexander VI, all the while she was married to – you guessed it! – an Orsini, this one the cleverly-named Orsino Orsini (which I think may loosely translate to Little Beary Bear). ﻿﻿﻿﻿﻿﻿﻿
Little Bear was apparently quite content to turn the other cheek while Giulia got busy with the papa of all Papa Bears, Alexander VI. Born Rodrigo Borgia, Alex was quite the man of the cloth himself, if those cloths include bed sheets. Father to four illegitimate children while a still cardinal (including those dastardly siblings and maybe lovers Cesare and Lucrezia Borgia), and later the baby-daddy to his daughter with Giulia Farnese, Alexander took nepotism to new heights by installing his sons as cardinals and dukes, and arranging and then breaking several marriage pacts for Lucrezia, with whom he, too, might have been sleeping. He died at the age of 72, quite possibly by accidental poisoning at the hand of Cesare. That his successor adopted the name Pius is no coincidence.
﻿
Oh, but I digress. But only because the lusty Borgias and the dastardly Orsinis are so much more fun than boring, heartsick Pier Francesco, who no-doubt would have hung out in comic book stores and played Dungeons and Dragons were he alive in the 1980s.
Anyway, Pier Francesco conceived of the park on his estate at Bomarzo, either as a physical monument to the non-slutty Giulia Farnese or simply as a place of whimsy for himself and his guests. In either case, the park fell into disuse after his death in 1585. Though artists like Salvador Dalí and Jean Cocteau were familiar with the overgrown tangle of fantastic sculptures, it wasn’t until the 1970s that the Bettini family, who still own the park today, grabbed rakes and lawnmowers and restored the park.
﻿﻿﻿﻿﻿ ﻿﻿﻿﻿﻿Fast forward to 2012, and to an unwitting American expat (that would be me) who thought Il Parco dei Mostri was a little-known tourist attraction that drew only those with a taste for the quirky and arcane, like the people who make a special trip to visit the Corn Palace in South Dakota or the World’s Largest Twine Ball, which depending on whom you ask, is located either in Darwin, Minnesota or Cawker City, Kansas. (For clarification purposes, the good people of Darwin renamed their ball of twine the World’s Largest Twine Ball Rolled By One Man, to distinguish it from Cawker City’s World’s Largest Twine Ball, which is a still-growing community effort. Everyone knows Kansans are notorious cheaters, anyway.)


But instead of only the few, the geeky and the curious, on this sunny Easter Monday, Paolo, Naomi, me, and every family of eight or more from Rome and vicinity decided to descend on the Sacred Woods. It’s a good thing there are no sacred nymphs or unicorns (other than the stone kind) flitting about those sacred woods, as the baby strollers, ringing cellphones and picnicking Italians would  frighten them all away. One woman blocked one of the few stroller/wheelchair friendly ramps by arguing loudly on the phone, presumably with her soon-to-be-ex-mother-in-law (“He’s your son; now he’s your problem!”). Another couple, no doubt the incestuous descendants of some lascivious pope, stood making out in front of a giant stone turtle as a friend waited to snap their photo free of the madding crowd, which was also hoping to snap a more G-rated photo of the turtle. Parents thumbed through photos on their iPhones as their children wiggled under a fence and climbed all over a sculpture of dragon, until a security guard chased them off and scolded the decidedly nonplussed parents. Soccer balls bounced off the ionic columns of model stone temples and the noses of lions. ﻿
﻿﻿ ﻿ ﻿ ﻿ ﻿So, my take away from the Parco dei Mostri is this. It’s a beautiful, fanciful sight, and worth a visit, on a weekday, and not on a weekend or holiday, when Italians clog every bottleneck in the sidewalk and pack the picnic grounds towel-to-towel like they do a Mediterranean beach in August. As we paused on a rare available bench, it was possible to imagine, in between the screaming kids, the ringing cellphones and the wafting smell of grilled meat, that on a less crowded day the park is a lovely spot to spend a few leisurely hours.


And to Renaissance visitors, who saw the park free of the noise pollution of tour buses, passing airplanes and the distant train, it’s ivy-shaded paths, perhaps a bit more fecund and overgrown nearly 500 years ago, I imagine the park and its woods did seem just a little bit sacred. As long as it wasn't a festa.
﻿﻿﻿﻿ ﻿
﻿﻿﻿﻿﻿

Cleaning house in Italy: It's a family affair

Last week I wrote about the Babysitting Brigade and now, it’s time to tell you about the Cleaning Crew. This is another of those things that makes me marvel about life in our small town – that family members voluntarily offer to clean other family members’ homes, just because they like to help.
At least once a week, I see Paolo’s cousin, Antonella, at her daughter’s house, hanging laundry out to dry. Franca goes to her daughter’s house every morning and makes beds, even though everyone in the house is perfectly capable of making their own. When Paolo and I used to talk on Skype before I moved in Italy, I would often see Franca in the background, mopping the floor or ironing. 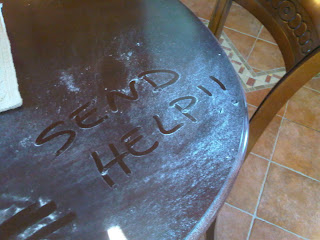