Nonno Gino: The man and the legend

I only knew one of my grandfathers. My father’s father died before I was born, and my mother’s father died when I was 11 years old. Likewise, my maternal grandmother died before I came along, and my father’s mother died when I was 13. I’ve always regretted not knowing two of them, and losing the other two when I was still young.  So finding a new grandfather was just one of the many unexpected benefits of marrying Paolo, and by far, the best one. 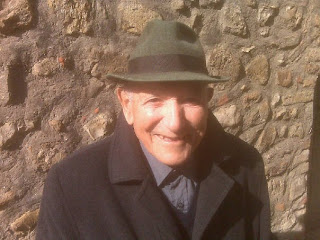 How do I begin to tell you about Nonno Gino? At nearly 99 years old, he is a living piece of contadini history, a man who was born in the countryside, grew up in the fields, and farmed or hunted nearly every piece of food he put on his family’s table. A man who knows how to make wine, press olives, graft trees, plant crops, butcher a hog, and build a fence. Who would rather craft an axe handle from a tree branch than go to the hardware store and buy a new one, who’ll wire together a broken flower pot rather than throw it away, and who still swings a hoe in his vegetable garden, even though his legs will barely hold him up anymore.
Did I mention he’s nearly 99 years old?
But it’s not just his mad contadini skills that make Gino so special. In fact, it’s not that at all. It is that he is spry, toothless, smiling, possessed of the joy of life, and full of song. That when the weather is good, he sits on the terrace and sings as loudly as he can, so folks living up in the village can hear him. That he cries when the weather stays bad for too long and he can’t go outside and walk, leaning on his cane, and gaze out over the hills and woods he once commanded. That when he goes to the bar, he tells his daughter (Franca, my mother-in-law) that he drinks an orange soda, when we all know he has a prosecco or an amaro. That he taught my husband how to hunt for cinghiale and wild mushrooms, how to make wine, and how to be a man.
Gino was born in 1913 in a podere, or farmhouse at Clormino, about 10 kilometers from Allerona. The kitchen was the only room with a fireplace, so on cold nights, that’s where everyone gathered before bedtime. They warmed their beds with a prete, an iron coal box they’d tuck under the covers before climbing in. Their water came from a well, and their bathroom was the outhouse. They kept rabbits, chickens, pigeons, ducks and doves, none of them as pets. They plowed
their fields with the same cow who pulled the wagon and provided milk for the family.

Gino and the 100 or so contadini who lived nearby, at a cluster of farmhouses called Spiagge (where Gino would find his bride, Zita) would walk to Bargeano, another hamlet a few kilometers away, for church, for dances and for festivals. They took their produce and livestock to sell at Allerona, a 45 minute walk. On market day in Orvieto, they woke at 4 am to make the 20 kilometer walk, driving a wagon full of produce and herding sheep or pigs with them. They’d return after dark, hopefully empty handed.

The Campo di Fiero, Orvieto’s large open livestock and produce market, is a parking garage now. Gino and his brothers’ farmhouse at Clormino lies in rubble, blown up in a gas explosion years after they sold it. The church at Bargeano has fallen down, too, though the bell tower is still standing, minus the bell. Most of Gino’s old fields are fallow, with the woods and Umbrian macchia¸or bush, overtaking them. Others are neatly planted with rows of young olive trees, the work of wealthy Roman entrepreneurs who bought up hundreds of hectares near his old home.
But here and there among those overgrown fields or rows of olives stands a gnarled peach, or cherry or walnut tree, split and knocked askew by lightning or time, but still bearing fruit. “I planted those,” he'll tell me as we drive on the strada bianca, or white road, out past Clormino and Spiagge. The plum trees he planted behind the podere are still there, and Paolo and I go every summer to pick the sweet purple fruit. The climb behind and over the rubble of the podere is too treacherous for Gino to make anymore, but we still show him the harvest. I can picture him on his knees, digging in the dirt with his hands and tenderly planting the plum seedlings in the ground. I know what it means to him, 50 or 60 or even 80 years later, to take a plum in his hands, marvel (quite literally) at the fruit of his long-ago labors, and bite down with his remaining teeth.
Gino has slowed down just in the three years I’ve known him. But he’s still robust (for 99!) and on a good day, he can still work in the garden, sweep the courtyard around our house or whittle us a new rake handle. When he finishes, he’s proud of his work, and buoyed that he can still contribute something. “Today,” he’ll tell Franca, “I feel like a lion!” Other days, when his years catch up to him or his body betrays him, he’ll cry and tell Franca that “nothing goes anymore.” He’ll speak about his future home, “giu” (down) and gesture in the direction of the cemetery.
But on the best days, Gino sings. Gino sings loudly and joyfully and out of tune, crooning the old songs of love and broken hearts and flower vendors and life in the campagna. He sings to us while we work on the house, he sings after family dinners and now, he sings to our baby daughter. Once in a while, during these precious and priceless concerts, Paolo and I catch one another’s glance, and each knows what the other is thinking: how much we already miss him, and he’s not even gone yet.
Posted by Unknown at 2:20 PM